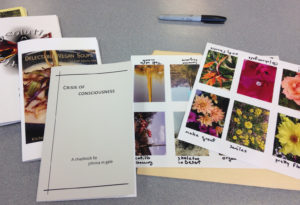 Making something out of nothing:

Last September I tabled my first ZineCon in Kansas City, Missouri. I was excited because it took submitting an application and being accepted. I had left the Zine Community in Phoenix when we moved to the heartland and I was a little afraid I wouldn’t find the queers and the outcasts in a place where most of the country’s grain is grown.

I was pleasently surprised when I came into contact with the Zine Distro Neither/Nor. Through them I learned about the ZineCon they hosted. I was so excited that I put out a live facebook video about getting my zines printed again, and actually going somewhere to sell them! The video rambled on while I waited for people to discover that I was talking to the world live, through the miracle of technology.

This resulted in a video that expressed my excitement about getting my work printed once more. I showed off the zines quite a bit, and showed the audience how to fold a micro zine (I call it How to make a Micro Zine, but really it’s just about how to fold one). I also discussed the solar eclipse, changes in our political atmosphere, and the benefits of creating art in a world that desperately needs an alternative voice. With the hashtag #metoo and Hollywood and sports moguls falling left and right because of sexual misconduct and downright criminal sexual behavior, now is the time to create diverse and resistant art. Zine-making provides a way for diverse voices with different points of view to be published. Zines contain many ideas, and getting them printed and published is a powerful feeling. Having them distributed throughout an underground network of other people who want to read the work is thrilling. It helps a creator feel validated. Having people buying my zines at a table was exhilarating. I felt incredibly validated as an artist and writer.

This year I am looking forward to producing several zines. One is called Queer Landings and is about making our own safe spaces as queer and trans people. I’d like to put out issue #2 of The Little Buddhist Zine. Additionally, I believe there is one more zine coming soon that contains the new poetry I’ve been working on over the last year.

I keep fooling myself into saying that I haven’t been creating, but I took a look at a few of the poems I’ve written and they are powerful, transformative. I look at the photography I’ve shot and the images stare back at me, stunning, beautiful, and some of the images could be called slightly haunting. I had my art hung in the Unitarian Universelist Chuch Sanctuary in the town I live in, art that I’ve never shown before. That was kind of scary. And I’ve made a bunch of short videos and shared them on YouTube and through the various social media channels. I continue to put my work in front of the public, and that’s something.

So I’ve been more productive than I thought. When I step back and read this, it puts what I’ve done into perspective. I hope to continue making art and video and zines, and hopefully I’ll be tabling at the Omaha ZineFest in April, if they’ll have me. I’m looking forward to that trip. Its the location of the vegan restaurant Modern Love, owned by the godmother of the modern vegan movement Isa Chandra Moskowitz.

If you have been making art, or think you haven’t been that productive, leave me a comment, share your work with us, I’d love to hear from you. In the meantime, enjoy this video that I created out of that live facebook feed. I’ve called it Talking about Zines. I know, I suck at titles. I hope you enjoy it, and here’s to a great start of the new year!