Yesterday, J and I went to Tucson for an excursion. The only planned activities were visiting our favorite bookstore, stopping at an art supply store or two and getting lunch at the local vegan restaurant. We were on a schedule, since J had to be to bed early in order to be at work at 3:30 a.m.

I felt bad about not buying anything at Antigone Books. Usually we buy at least one or two books when we visit. J introduced me to one of the owners and we chatted for awhile.  I browsed around for awhile, but nothing jumped out at me as needed.  I’m focused on gathering ideas and materials for my next batch of artwork and there wasn’t anything at the store that matched that.

Before we left the house, J did a search for art supply stores and found one called Sacred Grounds Trading Post.  According to the website, it’s been there since October 2005 and provides supplies for Native artisans as well as selling finished artwork and crafts.  We had hoped that J could find some materials for use in two new staffs he’s promised to make for friends.  However, I was the one who ended up buying — several feathers, some beads, and a couple of organizers.  We both noted other things they keep in stock that may be useful in the future.  It’s a great little store and we chatted with the Assistant Manager, Tomasa, for quite awhile. 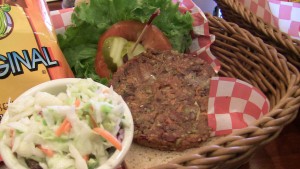 Lunch was at Lovin Spoonfuls, the sole vegan restaurant in Tucson and a place we’ve eaten at virtually every time we’ve driven down there.  The owner is an amazing woman who has created some really good faux meat products that I used to love eating. Now that I’m gluten-free, those aren’t available to me, as most are wheat-based.  They do have some good veggie burgers, yummy soy ice cream deserts and a really good gluten-free bread for the burgers and sandwiches.  There’s also a vegan bakery case — but again, the cakes and pies aren’t available for a gluten-free diet.

Another great find was Third Eye Arts, a metaphysical store on 4th Ave (no longer open).  They weren’t open when we were downtown before lunch so we made a trip back afterward to check them out.  In addition to finding some nice candles and charm-like symbols to use in my artwork, J made a connection with a potential client — which is great because we’d love to have Kitchen Shaman offering cooking classes in Tucson and other parts of Arizona as well as the Phoenix Valley.

All in all it was a productive and enjoyable — if short — visit to J’s former hometown.  There was some talk about how happy J would be to move back to Tucson and idle wondering about whether or not I could do my job from there — given that I work nearly 100% of the time from home. We had considered moving to Tucson five years ago.  At the time the cost of living there was pretty high while salaries for both of our jobs were low.  Now we both have jobs (J could probably transfer within the same company) and housing costs are probably lower — since rentals dropped all over the state after the real estate crash.  But, there’s only one vegan/vegetarian restaurant (as opposed to six here with a seventh opening very close to our home soon) and all our friends are here — even if we don’t have much of an opportunity to spend time with them.

I doubt we’ll be moving anytime soon — though we’ll probably make more of an effort to drive down there more than once a year.